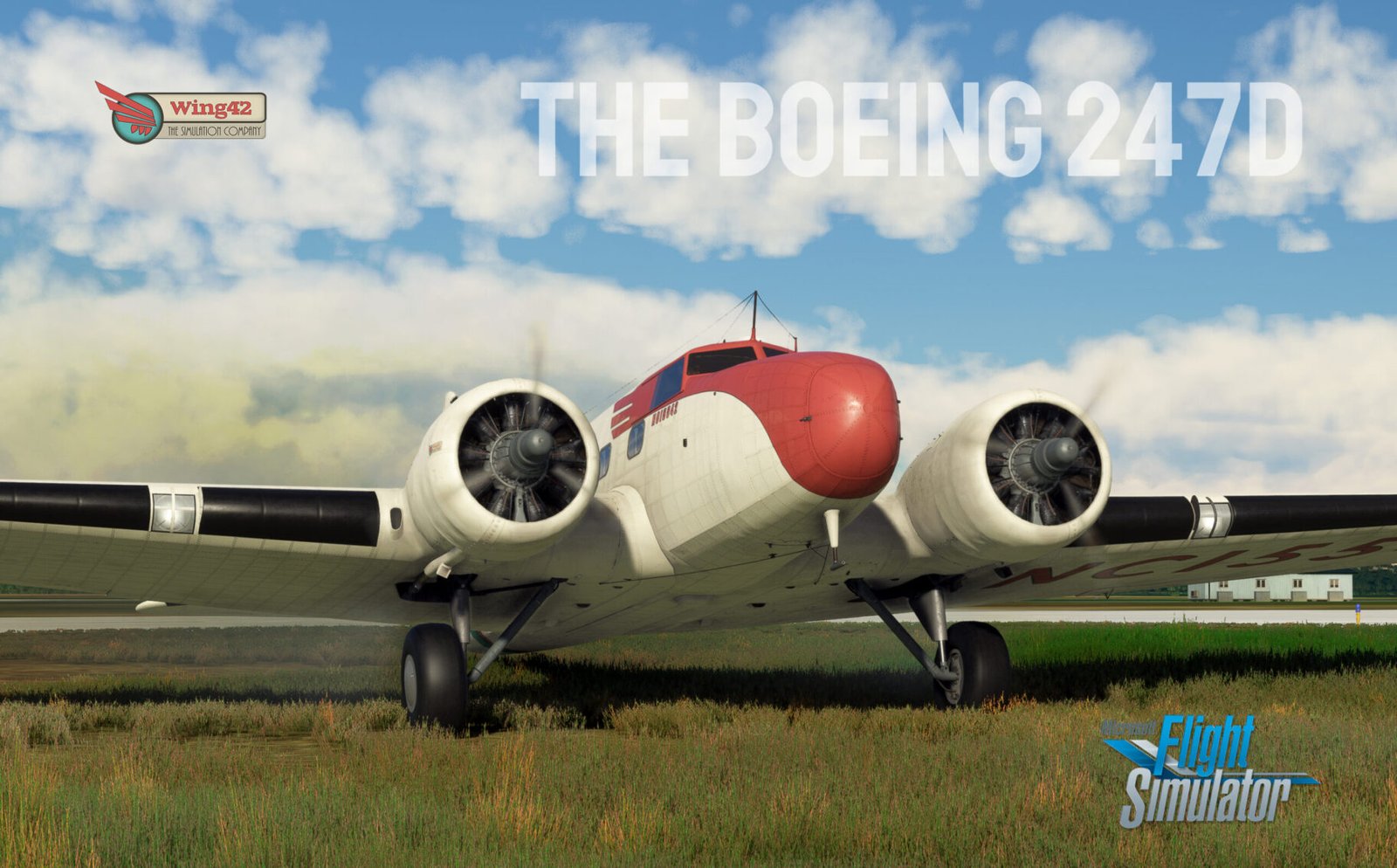 There is nothing like the nostalgic thrill of flying the Wing42 Boeing247D! Developed in 1933 and considered the first aircraft to fully incorporate an all-metal construction, cantilevered wings and a retractable landing gear. It become known as the first modern airliner to grace the skies. History, nostalgia and adventure combined, Wing42’s Boeing 247D has it all!

If you want a richer real-world simulation, then you’re in the right place. Wing42’s Boeing 247D is the first aircraft in MSFS to fully implement a radio range navigation module. That means no GPS, no VOR, just pure good ol’ fashioned Morse-code-fun! We’ll have you “flying the beam” which is guranteed to make you feel like you’ve travelled back in time. Prepare your ears, you’ve been warned!

This is Wing42’s first aircraft on MSFS that incorporates the Prop-o-Tronic Physics Engine. Using real-world physics and enginnering, Wing42 has custom-coded a wide range of systems, behaviours and effects that will immerse you deeper into the world of early avaiation.

Embark on your most realistic flight to date, with Wing42’s (revolutionary) Boeing 247D. Developed in 1933, this aircraft set the standard for a new generation of airliners. Gone were the days of wood-and-canvas contraptions, now the future awaits with Boeing’s first-of-a-kind modern airliner! Features such as a retractable landing gear, cantilevered wings, and a top speed of over *190 miles per hour, undoubtedly make the 247D a remarkable aircraft with historic significance.

The Wing42 Boeing 247D is the first aircraft in MSFS to fully implement a radio range navigation module that will have you “flying the beam.” So attune your ears and decipher the code, it’s by no means an easy feat, but it’s all geared towards giving you an experience like no other. If you are looking for immersion that simulates a wide range of behaviours and effects, then prepare to have your hat blown off with our custom-coded Prop-o-Tronic Physics Engine. It uses real-world physics to simulate a rich and interactive flight with significant consequences – so don’t be ill-prepared!

Super-realistic flight model, based on aerodynamic analysis and numerous sources from operating procedures to pilot reports. The flight model for the Boeing 247D was meticulously developed by aerodynamics expert Pamela Brooker, verified and tested by seasoned pilots.

The Boeing 247D features our first implementation of the Prop-o-Tronic physics engine in Microsoft Flight Simulator. Systems accurately simulated by Prop-o-Tronic are:

Custom animations for all moving parts and controls, from the light switch in the wash room to the vibration of the antenna wire in the wind.

Ground operations and our virtual clipboard

Our virtual clipboard is used to install various ground equipment, remove the cowling of the Pratt&Whitney S1H1-G engines, load the aircraft with passengers, cargo, mail, fuel and oil, and get the engines started. We also provide some key-reference data for your flight, in case you don’t have your checklists handy.

The 247 had a peculiar engine starter, consisting of a flywheel with a hand-crank and clutch, both operated by the ground crew. You can either have your virtual ground crew do their job, or get your hands dirty by hand-cranking the engines yourself.

The add-on comes with a custom WWise sound pack, carefully designed by the professional audio mastermind Zak Spence. It includes amazing engine sounds, wind effects, audible controls and much more for a most immersive experience. Hear the engines roar, the equipment rumble, the radio crack and the switches click.

The Wing42 Boeing 247D features an now outdated radio navigation system called “radio range”. The pilot of a historic 1930s aircraft would dial in a frequency on the radio and listen to the changing Morse code transmitted to find his way. It is an annoying and challenging, yet very rewarding way of navigating the skies. We included almost 700 historical radio stations (around 400 of them located in the U.S.A.) and outfitted the aircraft with a Bendix MR1B wireless controller.

But fear not! We also provide plenty of information in form of manuals and video tutorials to get you started!

Utilizing the new effects system where possible, the Boeing 247D comes with custom made effects. From engine smoke to reading lamps in the cabin, the Boeing has them all!

Access the documentation of the Boeing 247D right here:

Note:The add-on comes with additional documentation, including original training manuals for radio navigation from the 1940s. After the purchase and installation of the aircraft, you can find those documents under:

If you purchased the add-on via the MSFS marketplace, the documentation can be found under:

We’re working on an official paint kit for the Boeing 247D. Stay tuned!

In order to provide you a personalized shopping experience, our site uses cookies. By continuing to use this site, you are agreeing to our Privacy Policy.
ACCEPT
Added to wishlist! VIEW WISHLIST