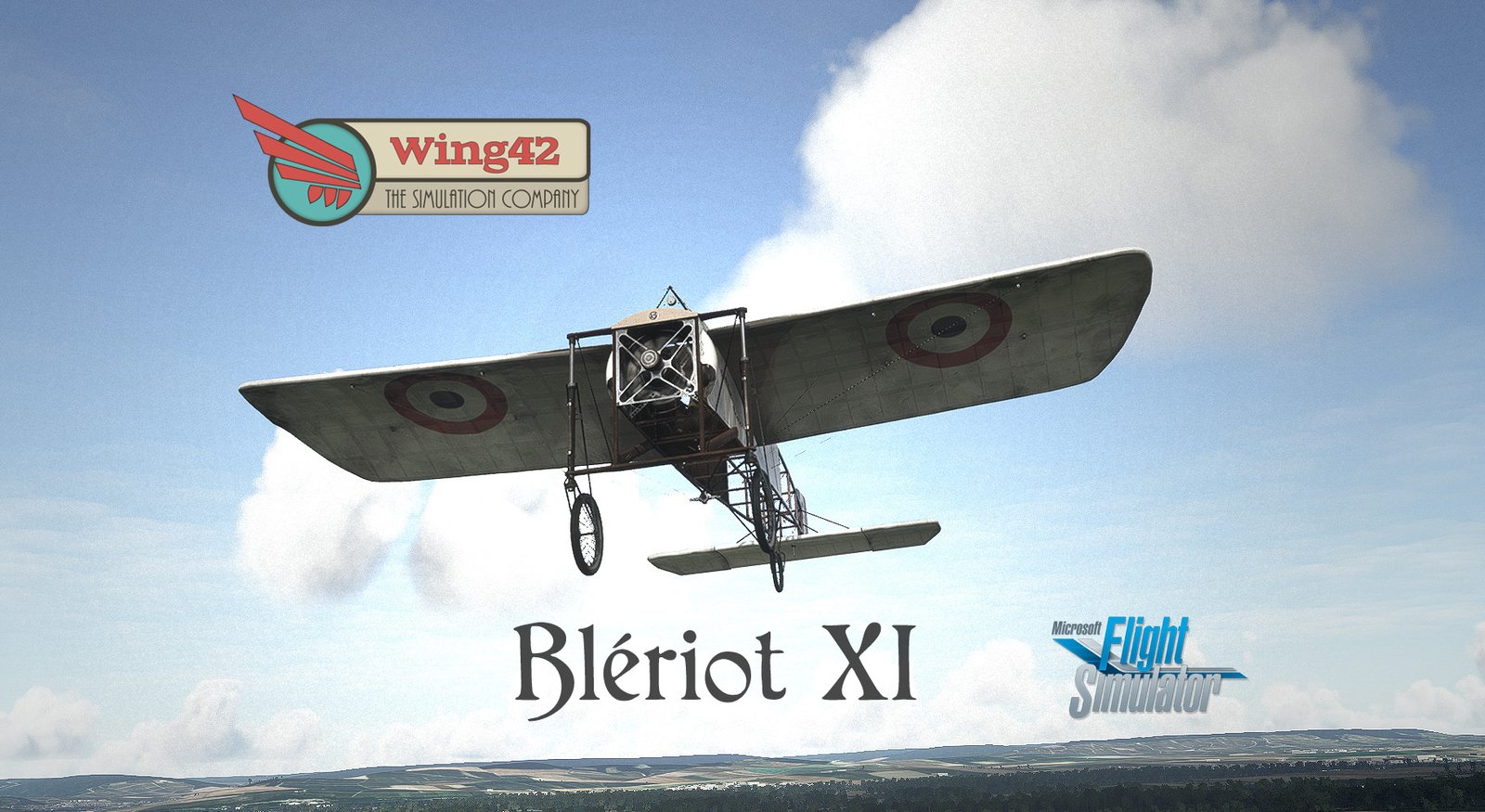 Wing42’s latest addon for Microsoft Flight Simulator warmly invites you to master the oldest airworthy airplane in the world: The Blériot XI! The type XI was the 11th machine constructed by French aviator Louis Blériot and it made its first flight at Issy-les-Moulineaux (near Paris) on Jan. 23, 1909.

The Blériot was a great sporting and technical feat, and opened the way for the birth of the aeronautics industry. It’s a very demanding aeroplane to master but here at Wing42 we’re all about that Pioneer Spirit!

Take this flying beauty out under peaceful blue skies when the weather is calm – it’s guaranteed to give you a completely new flightsim experience!

The Blériot XI is powered by:

It is the year 1909, only six years after the brothers Wright performed the first motorized flight, when Louis Blériot achieved a breakthrough with his 11th attempt of designing a functional flying machine. The type XI was the 11th machine constructed by French aviator Louis Blériot and it made its first flight at Issy-les-Moulineaux (near Paris) on Jan. 23, 1909. She was a marvel of technology and the first successful monoplane design, featuring many elements that are still in use to today. The Blériot XI won awards, set records and was flown all around the world by the first aviators.

With this addon, Wing42 brings this iconic aircraft to life for Microsoft Flight Simulator, so you can relive the great moments and dangers of aviation in the 1910s. The Wing42 Blériot XI features two variants depicting prominent contemporary specimen of this aircraft. The high fidelity model features high resolution PBR textures, unique and jarring soundpacks – utilising the new WWise sound engine, as well as a ultra-realistic flight model that makes you tighten your grip around the controller until your knuckles turn white.

Flying a Blériot XI means flying with very small margins of error. With the cruise speed being a meager 7 knots higher than your stall speeds, it’s a challenge to even keep this aircraft airborne! The light-weight construction, combined with inefficient wing-warping, means that there’s very little lateral control and you need to plan every turn carefully, to ensure you don’t end up in a spin.

On the other hand, this aircraft set numerous world records for speed, altitude and endurance. Louis Blériot performed the prize-winning flight across the English Channel in his ‘Onze’ – coincidentally completing the first international flight with this feat. A few years later, Peruvian Jorge Chávez chose the Blériot XI for his flight across the Alps. Swiss aviator Oskar Bider bought a Blériot XI to be the first to fly across the Pyrenees in a record flight of over 500 km from the French town Pau to the Spanish Guadalajara, close to Madrid.

Dive into the Wing42 Blériot XI and recreate these amazing accomplishments for yourself! If you do, you will re-learn how to fly and become a better pilot for it!

Custom animations for all moving parts, including cables, wing-warping, down to the opening and closing of the exhaust valve of the cylinders of your engine.

Super-realistic flight model created by aerodynamics expert Pamela Brooker. The model was meticulously compiled with the help of real-world data analysis and the study of numerous pilot reports. The included “R.I.P. Edition” of the Anzani-powered Blériot XI embodies the most realistic simulation experience.

Included are two variants of the Blériot XI: the Anzani-(under)powered one that Blériot flew across the English Channel, as well as the more common Gnome-powered variant.

Documentation consists of a 20-page manual, installation instructions and an original 1910 manual of the Blériot XI in French. As a bonus: a 39-page e-booklet about the history of this great flying machine, written by aviator Tom Harnish.

The Wing42 Blériot XI comes in many different liveries and variations:

There are no reviews yet.

Be the first to review “Bleriot XI for MSFS” Cancel reply
no additional resources available for this product.